On May 1, 2022, Hydrate Detroit and MIMAC (Michigan Mutual Aid Coalition) hosted a May Day event under the pavilion in Dueweke Park in Detroit. PSL, Fight For $15, and the Detroit General Membership Branch of the IWW also atteneded and participated in the event. The Detroit GMB helped fund the event by giving funds for food and drink, and the AgitProp committee tabled at the event. Free food was given out to try and draw in the public.

The Agit Prop committee talked about the IWW with attendees of the event. The committee sold buttons for a dollar and handed out copies of “Think It Over: An Introduction to the IWW”. Later in the evening, a member of the Detroit GMB branch appeared on a radio show to talk about the IWW. 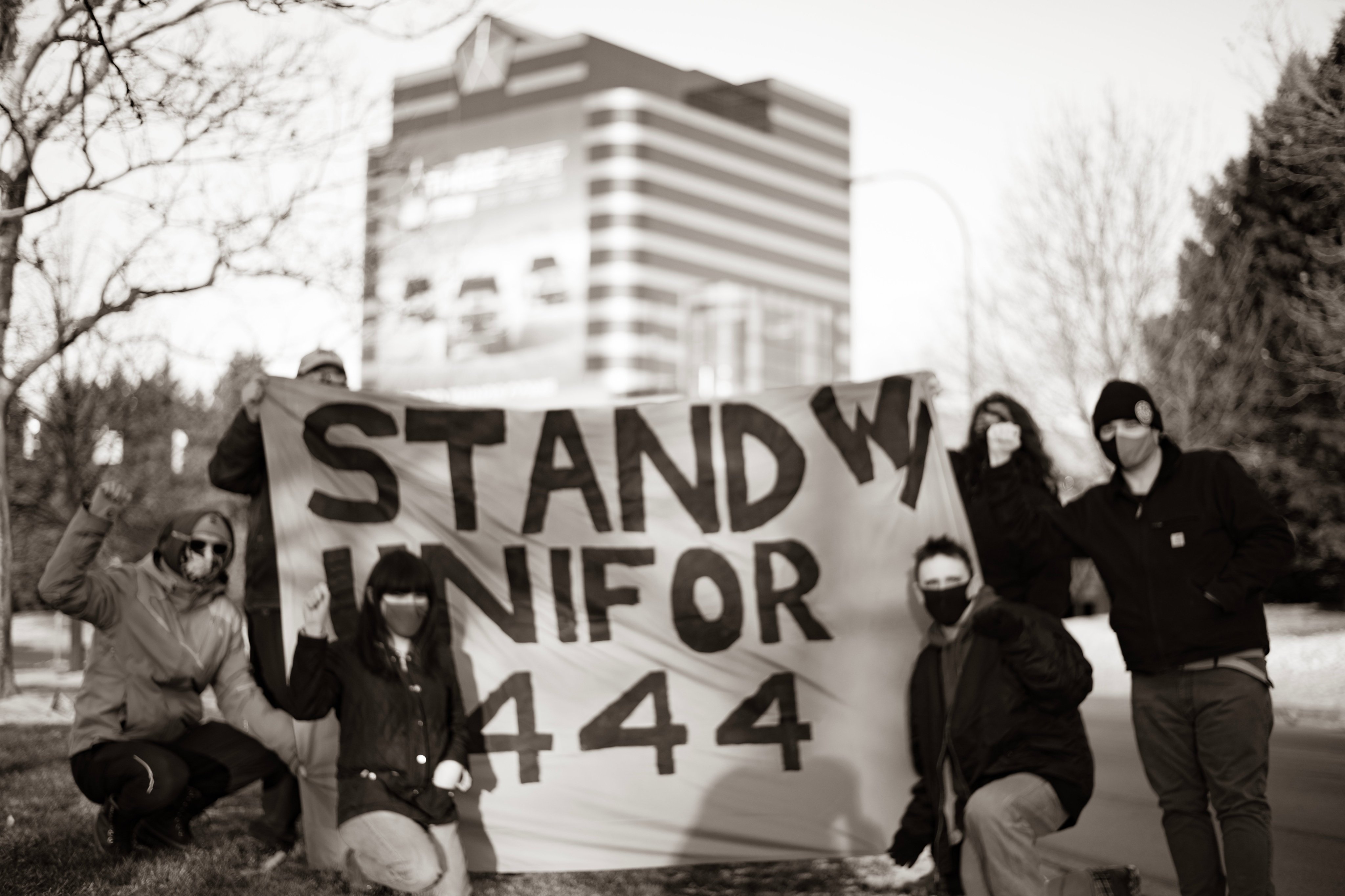 This January, members of the Detroit IWW traveled to the North American headquarters of Fiat Chrysler Automobiles (FCA) in Auburn Hills to show solidarity with striking auto industry workers across the border in Windsor, Canada.

Members of Local 444 of Unifor, Canada’s largest private sector union, barricaded the Windsor Assembly Plant on Jan. 5 as part of a labor dispute involving workers who drive completed minivans out of the factory, which is owned by Stellantis, a subsidiary of FCA. The strike began after 60 drivers who had been working there for Auto Warehousing Co. learned their jobs had been eliminated when Stellantis signed a deal with Motipark, another driver management company represented by the Teamsters, to take over the plants driving duties.

When that new contract took effect on Jan. 1, Motipark refused to take on any of the former drivers as employees. In response, Unifor argued they had successor rights for the driving work, meaning that the previously employed drivers should have kept their jobs and benefits. Looking at the two companies rates, it’s not hard to see why Stellantis might have been motivated to renegotiate its driving contracts; Motipark pays starting drivers $17.77 per hour, while Auto Warehousing Co. employees were paid  between $20 and $24 per hour, according to Unifor Local 444. Aware of the dynamics of this situation, drivers barricaded the plant, which prevented new minivans from leaving the plant and created economic pressure for a settlement.

Upset with Stellantis and Motipark’s treatment of the drivers, 7 Detroit wobblies journeyed out Auburn Hills on Jan. 8 with banner reading: “Stand with Unifor 444,” in an effort to raise awareness about the labor struggle.

“We went there to do a banner drop, so we could show support and signal to Fiat Chrysler and to other people in the United States that we’re sympathetic to these workers,” says Nathan Reiber, Branch Secretary Treasurer of the Detroit IWW. “They had the right to continue working in that factory!”

The blockade finally came to an end on Jan. 19, when Unifor announced a deal restoring the drivers jobs at the plant, showing once again that direct action does get the goods!


This August, members of various Southeast Michigan unions, including the wobblies, came together to sponsor a unique event, a special resource fair called “Equity First, Solidarity Works.” The program, which combined information-sharing and networking opportunities with a panel discussion discussing the connections between civil rights human rights, women’s rights and the labor movement took place Aug. 29 from 1 to 4 p.m. at Dean Savage Park in Detroit.

The coalition sponsoring the event initial came together through the chance meeting of rank-and-file members of local unions who participated in the local Black Lives Matters marches that followed the death George Floyd, who died as a result of Minneapolis police officer knelt on his neck for several minutes while he was handcuffed and lying face down in police custody. The Organizers who included union members of the Detroit IWW, IBEW Local 58’s RENEW Committee, D15, Ironworkers and SEIU wanted to create an event that would help build bridges between BLM and the labor movement, providing opportunities for city residents to get involved with unions and encouraging unionists to join struggles for racial, social and economic justice.

The resource fair was preceded by an 11 a.m. solidarity march led by Detroit Will Breathe, a local group that has been organizing anti-police brutality marches in the wake of George Floyd’s death. After that a crowd of roughly 100 people wearing masks to protect against the spread of COVID-19 gathered at Dean Savage Park, next to Detroit’s IBEW headquarters, for the fair itself. Information tables at the park allowed participants to learn about local union apprenticeships, the Skilled Trades Enrollment Assistance Program (STEAP), sponsoring groups and other local organizations. The panel discussion featured speakers from STEAP, SEIU, A. Philip Randolph Institute, IBEW and the activist group Detroit Will Breathe.

The event was livestreamed for those who did not attend due concerns about COVID-19.